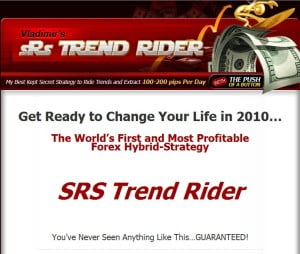 sRs Trend Rider is a unique Forex trading system. It’s a hybrid system, which means there are both, manual and automated components. The description of sRs Trend Rider says it’s 95% automated. We should understand that this system is based on a trading strategy that allows automation but also requires humanly touch.

The need for such a hybrid strategy makes sense, because there are no perfect automated expert advisors and yet a manual strategy is often hard to handle especially for beginners. sRs Trend Rider gives a solution that enables anyone to start trading, that requires minimal intervention and that includes trader’s decisions into the equation.

What pleases me is the amount of testing and proof provided for this Forex trading system. For the launch of sRs Trend Rider, three beta testers are running it on their accounts and live statements are provided. From these statements we can tell more about the strategy.

sRs Trend Rider seems to be working with different currency pairs (presumably all major pairs). It doesn’t set a take profit – the exit point is handled by the system itself and it seems to be an average of 29 pips. The average stop loss is about 35 pips. So that makes the award/risk ratio of approximately 1.24. It’s above 1 and ideally we’d like to see it less. The winning rate of 74% doesn’t add to decrease the risk either. However, it’s pretty close.

It’s worth to mention that while the above numbers are the average of all three statements provided, one of them has shown a risk/award ratio below 1. While that only adds to my assumption that sRs Trend Rider has a 50/50 chance to be successful in long term in any particular instance, it’s rare to see a system that achieves even that.

Also, having in mind the manual trading component in this hybrid strategy, it’s very likely that the human intervention is the key to turning it into a success or failure in the long term. Are you up for a challenge?