Renko Charts – Never Let Your Profit Turn Into A Loss 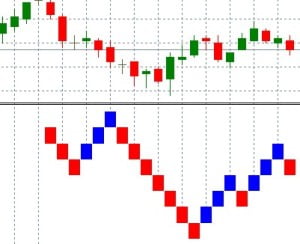 Never let your profit turn into a loss. In forex trading, a few seconds might be enough for the market to move into the negative territory and wipe out all of the pips gained by you. As a trader, your number one focus after entering into a trade is to determine when to get out. If the position is losing money, you can use the traditional stop loss strategies.

However, suppose your trade is profitable. Seeing profits emerge in your trade is exciting. But the technical challenge is to recognize when to exit a profitable position before your profit turns into a loss. These challenges are real as many traders are unable to get out in time and protect their profit.

On a Renko Chart, price movements are represented by bricks. Renko is the Japanese word for a brick. If the price moves up by a predetermined amount, we add a brick to the chart. The color of the brick is usually white, gray or green. However, you can select your own color.

Similarly when the price moves down by a predetermined amount, we add a new brick in the opposite direction that is usually colored red or black. However, you are free to select your own color. Each brick on the Renko Chart reveals information about the market sentiment at the various points in time. These bricks can be used by the trader as a way to identify the threats to the pips that have been gained so far in the market.

By setting these Renko Chart bricks to a small micro level price increment like 1 pip, a trader can get the earliest possible warning to the change in the market sentiment. This micro level of trading can be 1 minute or less.

On a Renko Chart, a bullish renko pattern is recognizable as a sequence of bullish bricks colored green, white or gray moving up. Similarly, a bearish renko pattern will be recognized as a descending series of black or red bricks. A general rule of thumb is to take three bricks in the reverse direction as the threshold. On the appearance of the fourth brick, exit half of the position and on the appearance of the fifth brick exit the market fully.