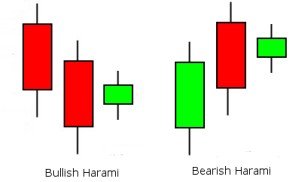 Harami is an important trend reversal pattern. It is a two day candlestick pattern with the candle of the setup day longer than the candle of the signal day. Harami is the Japanese word for pregnant. If you draw this a pattern, it will look like a pregnant woman. The pattern can be bullish as well as bearish.

In case of the bullish harami, the first day is a bearish candle that occurs in a downtrend. On the second day, bulls enter the market and start moving the prices higher but not with much success as the price close lower than the open of the first day and the first day’s high is not surpassed. However, when this pattern appears it culminates in a trend reversal.

If you want to identify the bullish harami pattern, it should have the following features. The market should be in a downtrend. The setup day has a longer candle than the signal day. The setup day candle has an open greater than the close and the body is fairly long.

When this pattern appears, it means a trend reversal. This pattern has a few variations. One important variation is the Harami Cross. In case of a Harami Cross, the setup day is a bullish or bearish long candle and the signal day is a Doji. Doji is formed when the open and close are the same. This is not a common pattern but when it does appears, it means a sudden trend reversal.

When this pattern appears and you want to trade it, you can use the close of the setup day as your stop loss. Sometimes, using too tight a stop might get you out of a successful trade. However, putting a stop loss with enough room can keep you in a bad trade too long. Where to place the stop loss is an art plus a science and it is one of the most difficult parts of trading.

Master these highly profitable Candlestick Patterns with this 82 page FREE Candlestick Guide. Watch this Forex Profit Multiplier FREE Presentation that shows a 60 second custom forex trading method that can be repeated multiple times a day whenever you got a few minutes to spare. It made 384+ pips in 12 hours.