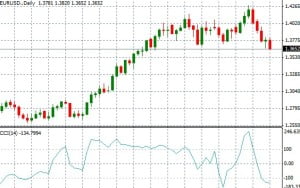 Commodities Channel Index breakouts occur when it falls below +100 or rises above -100. Most traders are taught to buy when the breakout from the oversold market takes place and sell when the breakout from the overbought market condition takes place. In this CCI Breakout Trading Strategy, we will be using a variation of this by combining the Commodities Channel Index Breakouts with our usual support and resistance on the Daily Charts.

Suppose the CCI Breakout takes place on the Daily Chart meaning the indicator falls below +100 or rises above -100. Place an Entry Order at the open price of the daily candle that caused the breakout. When a CCI Breakout takes place, the market often retraces to find enough interest amongst the buyers and sellers in the market to continue the breakout.

If your entry order doesn’t get filled in the next five trading days or the CCI Indicator again reaches the overbought or the oversold condition cancel the entry order. As you have almost a full day before the entry order will usually get filled by the market, you can plan your trade well using Fibonacci Retracements and Extensions and only place the trade with an entry order if the Risk to Reward Ratio is less than 1:3.

You can use this CCI Breakout to identify trend, counter trend as well as range trades. You will identify the take profit target with Fibonacci Retracement Levels in case of Counter Trend or Range Trades and with Fibonacci Extension Levels in case of Trend Trades. Place the stop below or above the immediate low or high set prior to the CCI Breakout. Only enter the trade if the risk to reward ratio is less than 1:3 otherwise skip.

First practice this strategy on your demo account. CCI Breakout Strategy requires patience as your trade can run for several weeks to reach the profit target. You need discipline to set the trade in motion and let it run.

Occasionally these trades can run from positive to negative floating profits as they work their way to the intended profit target. Once the trade is set in motion, you don’t need to do much. You can cut the trade short with a trailing stop if you want to! CCI Breakout Strategy is ideal for those people who trade part time!